Mr. Charlie Duke – “The 10th Man to Walk on the Moon” – brings alive his exhilarating experiences for ALC BA-LLB/LLB. students by way of a live session! 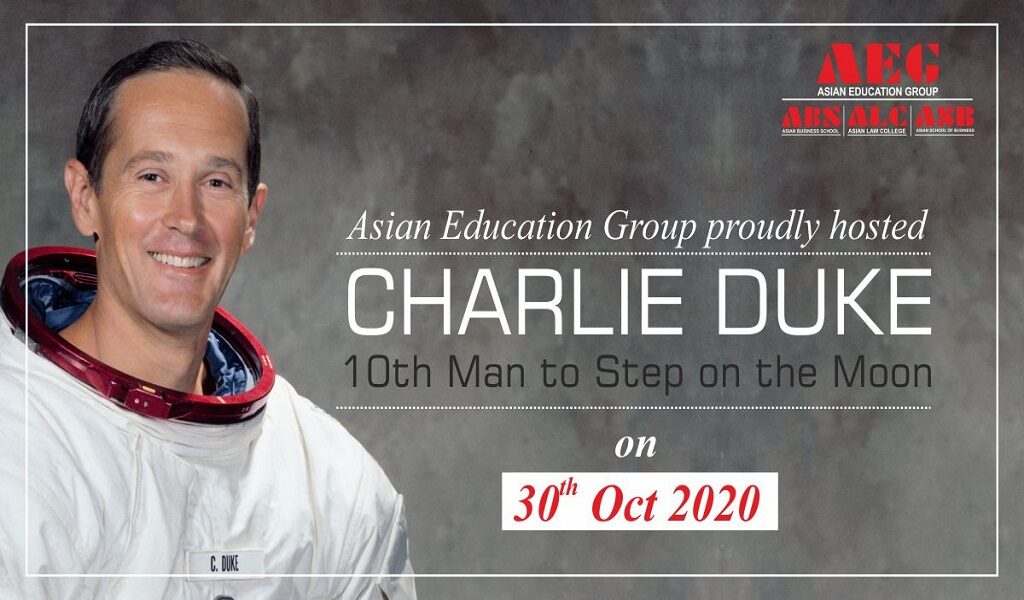 Mr. Charlie Duke – “The 10th Man to Walk on the Moon” – brings alive his exhilarating experiences for ALC BA-LLB/LLB. students by way of a live session!

Mr. Charles Moss Duke Jr. a.k.a. CHARLIE DUKE – “The 10th Man to Walk on the Moon“– offered a most exhilarating and mesmerizing live webinar session on his life and experiences for BA-LLB/LLB students & aspirants of Asian Law College (ALC) on Friday, 30th October 2020 at 6:30 pm (IST) under its Guest Lecture Series.

Graduating from the United States Naval Academy in 1957, Mr. Duke joined the USAF. He completed advanced flight training on the F-86 Sabre at Moody Air Force Base in Georgia, where he was a distinguished graduate. After completion of this training, he served three years as a fighter pilot with the 526th Fighter-Interceptor Squadron at Ramstein Air Base in West Germany. After graduating from the Aerospace Research Pilot School in September 1965, he stayed on as an instructor teaching control systems and flying in the F-101 Voodoo, F-104 Starfighter, and T-33 Shooting Star.

In April 1966, Mr. Duke was one of nineteen men who got selected for NASA’s fifth group of astronauts. In the year 1969, he was a member of the astronaut support crew for Apollo 10. He served as CAPCOM for Apollo 11, the first crewed landing on the Moon. His distinctive Southern drawl became familiar to audiences around the world, as the voice of a Mission Control made nervous by a long landing that almost expended all of the Lunar Module Eagle’s fuel. Mr. Duke’s first words to the Apollo 11 crew on the surface of the Moon were flustered, “Roger, Twank…Tranquility, we copy you on the ground. You got a bunch of guys about to turn blue. We’re breathing again. Thanks a lot!”

Mr. Charlie Duke was backup lunar module pilot on Apollo 13. Shortly before the mission, he caught rubella (German measles) from a friend’s child and inadvertently exposed the prime crew to the disease. As Ken Mattingly had no natural immunity to the disease, he was replaced as command module pilot by Jack Swigert. Mattingly was reassigned as command module pilot of Duke’s flight, Apollo 16. On this mission, Duke and John Young landed at the Descartes Highlands, and conducted three extravehicular activities (EVAs). He also served as backup lunar module pilot for Apollo 17. Mr. Duke retired from NASA on January 1, 1976.

Subsequent to his retirement from NASA, Mr. Duke entered the Air Force Reserve and served as a mobilization augmentee to the Commander, USAF Basic Military Training Center, and to the Commander, USAF Recruiting Service. He graduated from the Industrial College of the Armed Forces in 1978. He was promoted to brigadier general in 1979, and retired in June 1986. He has logged 4,147 hours’ flying time, of which 3,632 hours is in jet aircraft, and 265 hours in space, including 21 hours and 38 minutes of EVA. A resident of New Braunfels, Texas, he has chaired the board of directors of the Astronaut Scholarship Foundation. He was named Texan of the Year for 2020.

A core initiative of Asian Education Group (AEG) – considered as the largest centre for professional media, IT, law, management, fashion & hospitality education in Asia with world-class facilities – this webinar was organized Asian Law College (ALC) – which is a constituent group college of Asian Education Group and is ranked as one of the one of the best Law Colleges in Delhi NCR – for all B.A.LL.B. & LL.B.  students.  The webinar was followed by a lively Q&A Session with the most distinguished guest.

The most eagerly awaited session started with a welcome note, followed by a brief but highly impressive introduction of the illustrious guest by Dr. Supriya Srivastava on behalf of the AEG family. Then, Mr. Charlie Duke took the virtual centrestage, all the way from his residence at Texas, USA!

Extending his warm greetings to all students, he gratefully acknowledged the “miracle of technology” that was allowing him to talk live to students of Asian Law College in India, all the way from his residence at Texas, USA!

Next, Mr. Charlie Duke straight away got down to his life’s journey and began by recounting his birth in Charlotte, North Carolina as son of parents who worked for cotton mills around the place. As a young man, he said that he had a dream to become a naval officer and hence chose to study at United States Naval Academy. He subsequently volunteered for U.S. Air Force (USAF). When in 1957, the Soviet Union launched Sputnik 1 as the first artificial Earth satellite, that excited his curiosity about space.  And, when Yuri Gagarin became the first human to journey into outer space in 1961, that really fired his own ambition greatly. According to him, from here there was no looking back for him. He then traced his academic and professional journey through the years till the most memorable moment of becoming the lunar module pilot of Apollo 16 in 1972 when he became the tenth (and as of 2020 remains) and youngest person to walk on the Moon, at age 36 years and 201 days!

Here, Mr. Charlie Duke got into the most chilling and mesmerizing details of his famous journey to the moon –  replete with a vivid account of the preparations, the take-off, the problems and challenges, the tensions and the suspense … and the final landing on the surface of the moon that he described as “the most beautiful, serene environment that he had ever seen”! He further spoke at length about his driving his EVA over the moon’s terrain, the fine dust that covers the moon surface, his moment of fear while being there, and his leaving behind his family’s picture frame on the moon as a souvenir.

As was expected, his young the audience was spell-bound in silence listening to this most wonderful saga of human spirit!

Thereafter, Mr. Charlie Duke opened the session for questions. There were a series of questions related to his historic moments on the moon, to which the famous guest provided answers to the utmost satisfaction of the students.

Before concluding his talk, in his message for the ALC students, Mr. Charlie Duke shared some great words of wisdom and inspiration and said, “No matter what you do, pick a career that you like and are excited about … something that you like to do. And then go for it wholeheartedly. That would be the best choice for you in your lifetime!”

Mr. Charlie Duke was then presented with a glittering “Memento” on behalf of Asian Education Group, which was profusely appreciated by the honourable guest.

With this, this most exhilarating and mesmerizing session with Mr. CHARLIE DUKE – “The 10th Man to Walk on the Moon“– came to a fitting end!