Asian Education Group (AEG) recently held its much sought-after mega annual inter-college sports event – ATHLEEMA 2019-Season 7 – from 13th to 15th March 2019 at the sprawling Jasola Sports Complex, New Delhi with its traditional punch of excitement and grandeur. In all, 36 top colleges and universities from across the country enthusiastically participated in this sports spectacle. This included Asian Law College (ALC) and the other two group colleges of Asian Education Group – namely, Asian Business School (ABS) & Asian School of Business (ASB) – which actively participated in this high-pitch athletics’ meet.

Of the several games in which competition was held, one was the highly popular game of Cricket.

Here’s an account of how it happened at ATHLEEMA 2019-Season 7:

Teams from 9 different institutes competed for Cricket, the most prestigious event in the 3-day gala affair.

In the second Semi-Final, despite a ferocious assault towards the end, JIMS Engineering Management Technical Campus went on to lose to Dyal Singh College (E).

Going into the Finals, Dyal Singh College (E) seemed to be favorites to win the trophy as they looked the stronger side based on the batting prowess they displayed in the previous matches. However, PGDAV College had different ideas and they put up a stellar performance in the finals and it was literally a one-way traffic once the run chase started and they went on to triumph by a whopping 44 runs!

Throughout the tournament, the slower bowlers from PGDAV College were worthy of credit for choking the scoring rate of opponents as they hardly provided the opponents with any freebies.

For his all-round performance with ball as well as bat, Prince Choudhary from PGDAV College was adjudged Man of the Series. Also being the captain of his team, he went on to lift the glittering trophy for being the champion team.

The Asian Education Group ( AEG) Team of Cricket which consisted of students from all three  colleges i.e. Asian School of Business( ASB), Asian Business School ( ABS) and Asian Law College ( ALC) was headed by Mr Rachit Manchanda, student of ALC  as Captain of the team. The captain and his team gave a tough competition  to the competitors and the vision of Asian Education Group to bring overall personality development of the student was  testified  in the way students of all three colleges performed in the sports. 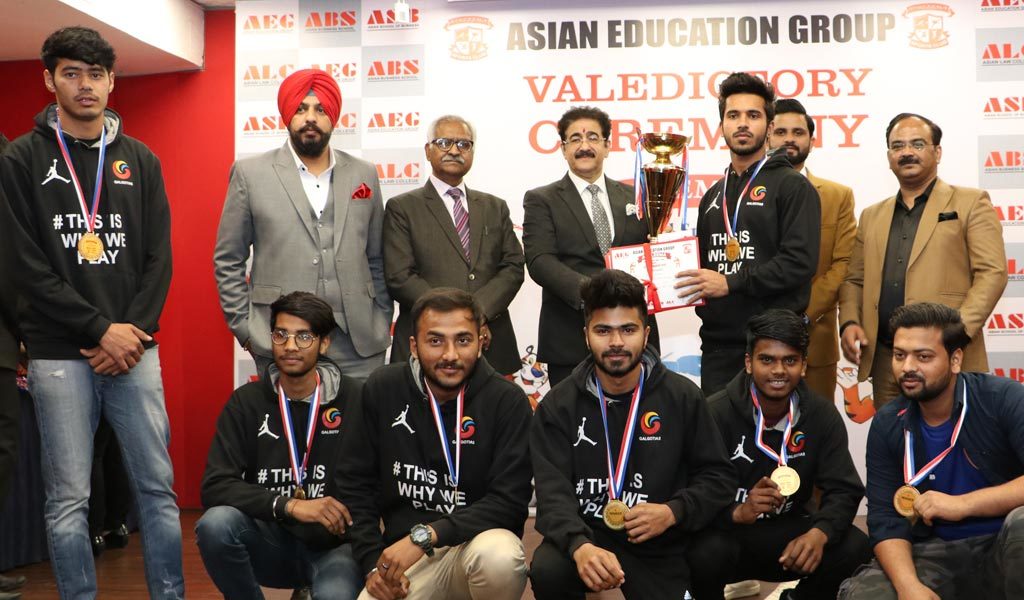