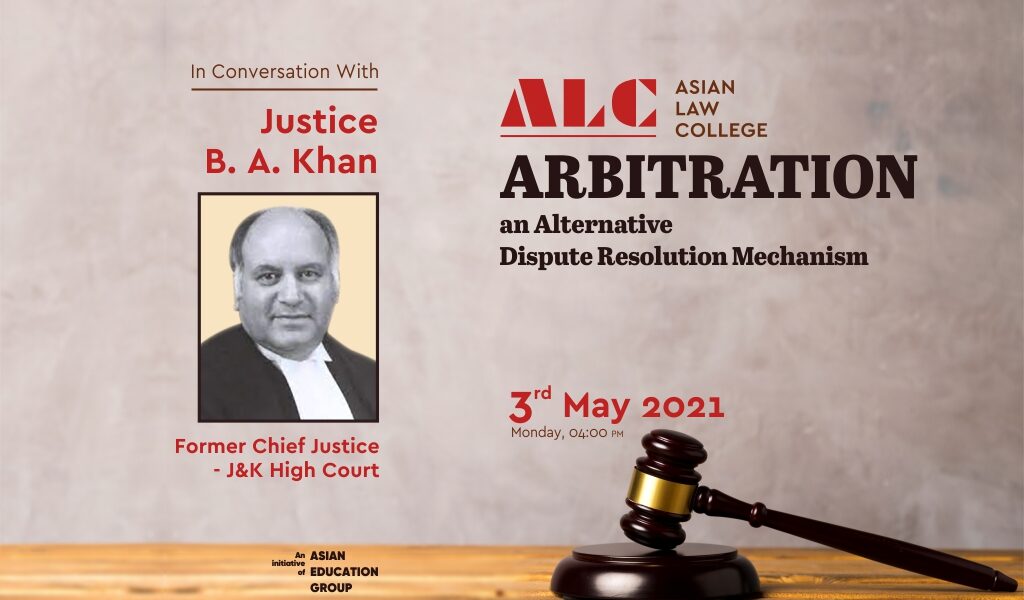 JUSTICE B. A. KHAN – Former Chief Justice – J&K High Court – delivered a live interactive webinar session on the topic “Arbitration: An Alternative Dispute Resolution Mechanism” at Asian Law College (ALC) for its BA-LLB & LLB students and law aspirants  on Monday, 3rd May 2021 at 4:00 PM onwards under its Legal Lecture Series (LLS). The webinar presented itself as a highly illuminative and helpful session for all who participated in it.

An initiative of Asian Education Group (AEG) – considered as the largest centre for professional media, IT, law, management, fashion & hospitality education in Asia with world-class facilities – this webinar was  organized by Asian Law College (ALC) – which is a constituent group college of Asian Education Group and is ranked as one of the one of the best Law Colleges in Delhi NCR – for all B.A.LL.B. & LL.B.  students. The webinar was followed by a lively Q&A Session with the most distinguished guest.

The webinar session started with a brief introduction of the illustrious guest by Ms. Garima Malhotra, Assistant Professor, AEG. This was followed by a succinct introduction on the topic of the day, i.e. “Arbitration” by Mr. Dhawal Kumar Singh, Assistant Professor  Asian Law College. Thereafter, the illustrious guest Justice B. A. Khan, Former Chief Justice – J&K High Court took center stage and conducted his session largely by way of answering a series of questions from the students all of which pertained to the nitty-gritty of “Arbitration” as an alternative dispute resolution mechanism. The highly experienced and respected legal luminary talked at length about the ground realities relating to this aspect of legal practice and laid threadbare the various challenges and loopholes that still needed to be plugged in order to make it a truly effective alternative dispute resolution mechanism.

Once done, Justice B. A. Khan was presented with a glittering “Memento” on behalf of Asian Education Group.

With this, the highly illuminative session with the experienced and respected legal luminary came to a solemn end!